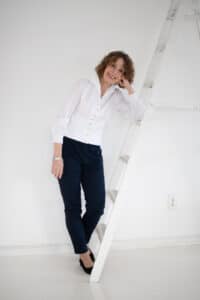 Joan has twice participated in the US State Department’s Professional Speakers Program, traveling to both Croatia and Kazakhstan. She is a member of the Writers Guild of America East, the Authors Guild, PEN, and the Society of Children’s Book Writers and Illustrators. She is currently working on a musical adaptation of her first novel, Squashed. She lives in Brooklyn, New York with her husband Evan and their intrepid wheaten terrier Max.She enjoys cooking, playing the piano, and hiking.

Joan has also been a recipient of the Judy Lopez Memorial Award; the ASTAL Award for Outstanding Contributions to Literature for Young People; the Michigan Thumbs-up! Award for Children’s Literature; the Delacorte Prize for a First Young Adult Novel; the Pacific Northwest Library Association Award; the New Jersey Reading Association M. Jerry Weiss Award; the New England Booksellers Award; and the Boston Public Library’s “Literary Light” Award. Her novels have been featured extensively on state award book lists, in addition to appearing on ALA Notable Books, ALA Best Books, ALA Quick Picks, American Bookseller Pick of the List, School Library Journal Best Books, Smithsonian Notable Children’s Books, VOYA’s Perfect 10s. Her novel Rules of the Road was chosen as one of the top young adult books of the quarter century by the American Library Association.

I was born at eleven A.M., a most reasonable time, my mother often said, and when the nurse put me in my mother’s arms for the first time I had both a nasty case of the hiccups and no discernible forehead (it’s since grown in).  I’ve always believed in comic entrances.

As I grew up in River Forest, Illinois, in the 1950’s, I seem to remember an early fascination with things that were funny.  I thought that people who could make other people laugh were terribly fortunate.  While my friends made their career plans, declaring they would become doctors, nurses, and lawyers, inwardly I knew that I wanted to be involved somehow in comedy.  This, however, was a difficult concept to get across in first grade.  But I had a mother with a great comic sense (she was a high school English teacher) and a grandmother who had been a funny professional storyteller, so I figured the right genes were in there somewhere, although I didn’t always laugh at what my friends laughed at and they rarely giggled at my jokes.  That, and the fact that I was overweight and very tall, all made me feel quite different when I was growing up–but it’s given me a lot of material as a writer.

My grandmother had the biggest influence on me creatively.  She taught me the importance of stories and laughter.  She never said,  “Now I’m going to tell you a funny story,”  she’d just tell a story, and the humor would naturally flow from it because of who she was and how she and her characters saw the world.  She showed me the difference between derisive laughter that hurts others and laughter that comes from the heart.  She showed me, too, that stories help us understand ourselves at a deep level.  She was a keen observer of people.

I kept a diary as a child, was always penning stories and poems.  I played the flute heartily, taught myself the guitar, and wrote folk songs.  For years I wanted to be a comedienne, then a comedy writer.  I was a voracious reader, too, and can still remember the dark wood and the green leather chairs of the River Forest Public Library, can hear my shoes tapping on the stairs going down to the children’s room, can feel my fingers sliding across rows and rows of books, looking through the card catalogs that seemed to house everything that anyone would ever need to know about in the entire world.  My parents divorced when I was eight years old, and I was devastated at the loss of my father.  I pull from that memory regularly as a writer.  My dad was an alcoholic and the pain of that was a shadow that followed me for years, but I’ve learned things from that experience that have made me resilient.  I attempted to address those issues in Rules of the Road, and I took them even further in the companion book, Best Foot Forward.  The theme that I try to carry into all of my writing is this: adversity, if we let it, will make us stronger.

In my twenties, I worked in sales and advertising for the Chicago Tribune, McGraw-Hill, WLS Radio, and Parade Magazine.  I met my husband Evan, a computer scientist, while I was on vacation.  Our courtship was simple.  He asked me to dance; I said no.  We got married five months later in August, 1981.  But I was not happy in advertising sales, and I had a few ulcers to prove it.  With Evan’s support, I decided to try my hand at professional writing.  It was a slow build — writing newspaper and magazine articles for not much money.  My daughter Jean was born in July of  ’82.  She had the soul of a writer even as a baby.  I can remember sitting at my typewriter (I didn’t have a computer back then) writing away with Jean on a blanket on the floor next to me.  If my writing was bad that day, I’d tear that page out of the typewriter and hand it to her.   “Bad paper,”  I’d say and Jean would rip the paper in shreds.

I had moved from journalism to screenwriting when one of the biggest challenges of my life occurred.  I was in a serious auto accident which injured my neck and back severely and required neurosurgery.   It was a long road back to wholeness, but during that time I wrote Squashed, my first young adult novel.  The humor in that story kept me going.    Over the years, I have come to understand how deeply I need to laugh.  It’s like oxygen to me.  My best times as a writer are when I’m working on a book and laughing while I’m writing.  Then I know I’ve got something.