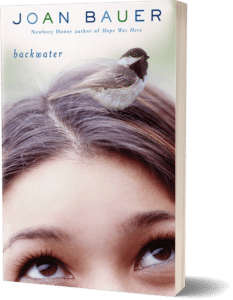 Stuck in a family overflowing with lawyers, Ivy Breedlove longs to be understood, to break free of unfair expectations and to find the truth about the missing link in the Breedlove family. With an outrageous mountain guide at her side, Ivy travels through the wild and wintry Adirondack Mountains to search for the one Breedlove who is, perhaps, like herself.

"...engaging characters, a light love interest, and dramatic tension in a well-paced plot, this is another great read from Bauer."
-- School Library Journal

"This warm, funny, patchwork quilt of a book offers a sturdy heroine, vivid characters, a touch of romance, and a final survival adventure that will keep readers turning the pages to the last."
-- Booklist

“Ivy Breedlove is a different kind of high school student…determined to buck family tradition by becoming a historian rather than a lawyer. While spending Christmas vacation with her eccentric extended family in the Adirondack Mountains, Ivy resolves to research the Breedlove history. Ivy never loses her common sense, her spunk or her inquiring mind. There’s an immediacy and sense of humor in her voice that will grab and hold the attention of teen-age readers. The risks she takes, beginning with questioning her family’s way of doing things and culminating in her struggle for survival, are plausible and lead readers on to the exciting and satisfying conclusion."
-- The New York Times

HOW DID THE IDEA FOR OUR NEW BOOK, BACKWATER, COME ABOUT?
I had wanted to write a story with a hermit in it for a long time—I’m intrigued by folks who can live fully alone, and always wondered about the people in their lives that they left behind.  There is a big part of me that is introverted—I’m sure that’s true of most writers. I can spend long periods of time by myself, so the hermit fascinated me personally. But I could never up and leave
society like Josephine did—I do need people around me; and I’d really miss gourmet restaurants.

Backwater, more than anything I’ve done to date, incorporates two very real sides of me—the gentle, misunderstood hermit, and the smart-talking teenager who is searching for voice and wholeness. As I got more and more into the story, I realized it’s a story about belonging—so often we think that belonging happens easily among people, and yet Backwater tries to show how complex belonging to a family can really be—what happens when relationships break apart and how they have to be repaired. As I wrote this book, I thought of the times I didn’t feel understood by people; remembered too often when I was surrounded by people whose styles were so very different than mine and how badly I wanted to bolt.

I also wanted to write something that took place in the Adirondacks, since my family and I go there to hike the high peaks and climb mountains. It’s a great love of mine and I got to share some of that by locating the hermit in the Adirondack Mountains.

IN BACKWATER THE MAIN CHARACTER, IVY BREEDLOVE, LOVES HISTORY. WHAT MADE YOU THINK OF A CHARACTER WHO LIKES HISTORY? DID IVY’S CHARACTER START WITH THAT IDEA? WHERE HAVE THE INSPIRATIONS FOR OTHER CHARACTERS COME FROM?

Now, you have to understand that I am a big history nut, and I think it’s because I so believe in the lessons we can learn from the past and from others. So I naturally think of history as a link to character. And my daughter, Jean, is a historian, so I pulled greatly from her passion for the subject. Ivy’s character always had a love of history, but she really came alive for me when I also gave her a passion as a family historian—that linked the entire story together and brought the story of the Breedlove family into focus. What Ivy understands and learns in an even deeper ways that understanding history helps us to understand ourselves. She knows she is part of generations of people who have come before her—and she wants to understand what part of those ancestors are in her mind and emotions, too. People are who they are for many reasons—I think it’s important for teenagers and for all of us to think about that. In my characters I always look for something unusual that also has universal underpinnings. Ivy understands that she is living her history right now—she understands she has a responsibility to the next generation. I like that about her very much. Jenna Boller in Rules of the Road has a deep passion for selling shoes—not a sexy profession by any means—it’s an ordinary thing to be crazy about—just like loving history seems ordinary, even boring. But most things, ordinary things, can be made wonderfully interesting and fulfilling when they’re fueled by passion. I could have Jenna be crazy about selling ice cream and work at 31 Flavors, but there was something about selling shoes that spoke to me—kneeling down to help a customer try a pair on, working with feet, which are not the most glamorous part of the body. I look for ordinary interests that can be made fully alive. There’s great humor in that, I find, and also life lessons to be learned. When I create a character, I layer on their personalities—fears, desires, past experiences, then stick something nutty in the mix. I’ve always seen characters like that. I’m like that, I think.

DID YOU DO ANY SPECIAL RESEARCH FOR BACKWATER?
My husband gave me a bird feeder a few years ago and I filled it diligently each time it got low so the birds knew they could count on me. Then once, as I was just starting Backwater, I’d forgotten to check the feeder and heard this cacophony of irritated tweets coming from my back yard. I went outside and saw that the feeder was empty and the birds were MAD I hadn’t filled it.  They were sitting in the trees crabbing at me. It was very funny. I tried to incorporate some bird attitude into the book after that.

Then last summer, in the Adirondacks on vacation, my husband, daughter, and I hiked a mountain we’d not been on before. It was a much longer ascent than we’d expected; we didn’t have enough food or water, and I was simply exhausted on the way down. It was awful. I was so weak, I was tripping and falling and yes, even crying. It was scary.  And it forever changed the way I think about being prepared on the mountain. I pulled from some of those feelings at the end of Backwater when Ivy is pushed to the limit.

One last thing: When I was researching hermits for the book, I went to the Internet to see what info I could find. And I found, I swear, an entire section on solitude…hermit.org
For the story of the real Ivy Breedlove, click here

Mountain Mama revved the jeep up, up. “Here’s the shortcut to the trailhead.” She made the last steep climb, rammed the jeep into second gear, heard the big wheels spinning in ice, rammed it forward, shouting, “Hold on, Breedlove, and shine her steady!” I clung to the frame with both hands as the jeep twisted and turned upp the narrow trail to something that only a wilderness guide could see. Mama pulled the jee between two huge pine trees and jumped out. I flopped forward, trembling. She marched over to my side, slapped me hard on the back. “Chapter seven, Breedlove–Celebrate your Victories, No Matter How Small.” “Whoopee,” I said weakly, and covered my face.