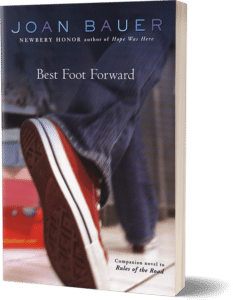 Jenna is a manager now, but her first assignment isn’t easy — managing Tanner Cobb, a former (she hopes) shoplifter and convict whose street smarts might be what she and Mrs. Gladstone need to uncover the wrongdoing at Gladstone Shoes.

After a life-altering summer on the road, Jenna Boller is dripping with newfound maturity. She has a job she loves at Gladstone Shoes, a best friend who makes her laugh, and a dysfunctional family she’s learning how to handle. Jenna feels ready for anything–until Tanner Cobb, a guy with a past, a police record, and dangerously good looks, walks into her life. Suddenly, Jenna’s surrounded by crises, including a shoe empire on the verge of crumbling. Tanner knows how to get around a problem, but can she trust him when the going gets tough?

"A great cast of characters, witty dialog along with Jenna's droll asides, and an insight into business ethics highlight this winning title..."
-- KLIATT

"{A} gentle, stand-alone sequel to Joan Bauer's Rules of the Road. This funny, winsome book is full of Bauer's trademark folksy wisdom, and will be warmly welcomed..."
-- Booklist

WHERE DID THE IDEA OF THIS STORY COME FROM?

My editor suggested I write a companion book, and she was right.  I hadn’t planned on doing it, but as I reviewed the novel, I realized there was so much more to this story.  I wanted to show Jenna’s empowerment in business and with her family.  I wanted to show the next stage of Gladstone Shoes and a merger that threatens their good name.  I felt both Jenna and Mrs. Gladstone were ready for a new adventure and I was, too.

WAS IT EASY TO TAKE CHARACTERS YOU KNEW SO WELL AND PLUG THEM INTO ANOTHER BOOK?

I absolutely thought it was going to be!  But it wasn’t.  That’s because they had both grown so much in Rules of the Road — like we all do when we go through a transforming time — and I had to keep them at the new level to write the book. A fascinating experience.  I love these characters even more now.

QUALITY AND TRUTH SEEM TO BE THEMES YOU WEAVE INTO YOUR NOVELS. CAN YOU TALK ABOUT THIS?

I believe we have to try to do our best — it won’t be perfect, but I feel we owe it to ourselves, other people, and our greater communities to try.  I like spending time with people who reach for excellence, who speak the truth, and don’t play games.  I don’t like people who say truthful things in nasty ways, but I so applaud those in the world who aren’t afraid to point out wrongdoing and hypocrisy and lies, and who don’t stop there, they get in the middle of it, roll up their sleeves, and try to make a difference.

WHAT’S YOUR FAVORITE PAIR OF SHOES?

A pair of black leather walking boots. They come up just over my ankles and zip up the sides. I can walk in those boots forever. I swear, when I put them on my toes say, ahhhhhhhhhhhh.

WHEN WAS IT HARDEST FOR YOU TO PUT YOUR BEST FOOT FORWARD?

When I was in a serious car accident and struggled to be able to write again. I had so much doubt and fear during those days, but I had wonderful people supporting me, too.

ARE YOU LIKE ANY OF THE CHARACTERS IN BEST FOOT FORWARD?

Yes, Jenna and I are alike in many ways. We’re both tall, have auburn hair, come from single-parent homes, our dads were alcoholics, we both have younger sisters, both had beloved grandmothers who had Alzheimer’s Disease, both of us were so empowered by after-school jobs, we both love selling, we’re both determined. I can be stubborn like Mrs. Gladstone. And Tanner Cobb and I share a special connection: I know what it’s like to think you can’t get too far in the world; I know what it’s like to have someone come up beside you, hold out a hand, and help.

WILL THERE BE ANOTHER BOOK USING THESE CHARACTERS?

I’m grateful for them; I put them through a lot, I really do. But do I like them? Honestly…No!

Discussing ethics in the story: