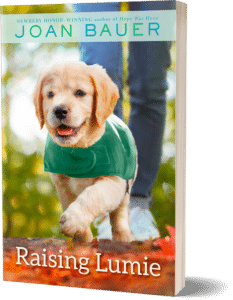 When we first meet Olive Hudson, age 12, she has a broken heart.  Loss has crashed into her life, but something else has, too.  Her big half sister Maudie, whom she’s heard about, but never met shows up.  Together these sisters become a family fast. And when a difficult move across the state brings Olive and Maudie to a new community, they meet adorable puppies — guide dog puppies in training who are being raised to help blind people.  Olive knows she has to get involved, and her life changes when she volunteers to raise Lumie to be a guide dog.  But is a 12 year old girl up for such a responsible job?  And does she really think she could ever say goodbye to Lumie when the year of puppy raising is over?

From Kirkus Reviews, starred:  Olive, a seventh grader with plenty of heart, is raising a puppy to be a guide dog for the blind. Olive’s devoted to dogs, and the opportunity to raise Lumie through the first year of her life comes at just the right time for her. Her beloved father died six months ago of cancer, and she’ll be living with her stepsister, Maudie, a young woman who’s nearly a stranger to her. Maudie is trying to find her way through a serious but unhappy relationship with a self-focused man who doesn’t want Olive in their lives. In addition, Olive must relocate three hours away from all she’s ever known, moving with Maudie into a small section of a rooming house. Winner of a Newbery Honor for Hope Was Here (2000), Bauer once again works her magic, crafting memorable characters overflowing with courage and kindness who react in believable—but also admirable—ways to the challenges in their lives … The pitch-perfect ending will leave readers both smiling and crying—simultaneously. Olive and Maudie present white; some of their fellow rooming-house residents are people of color. Outstanding for dog lovers and anyone who could use a hefty dose of good feeling. (Fiction. 10-14)

From Booklist:  If the Hallmark channel produced children’s movies, they’d option Bauer’s latest in a flash. She goes straight for the heart with the death of a parent, reunited sisters, endearing small-town characters, and puppies. Don’t resist. Just give in and let the wholesome story wash over you and work its magic. Having recently lost her father to cancer, 12-year-old Olive is still grieving while also coping with the significant changes such a loss entails, such as moving to a new town. The silver lining to this sad situation is getting to have her older half sister, Maudie, in her life as her new guardian; the two adore each other. Things brighten considerably in Olive’s world when she gets the chance to raise a puppy that will be trained as a seeing-eye dog. Lumie is a challenge and an endless source of love, and caring for her helps Olive move through her grief and connect with people in her new neighborhood. Bauer delivers a gratifying tale with realistic life lessons and literal puppy love.

From Publishers Weekly, starred:  A guide dog in training helps a grieving girl navigate a transitional year in Bauer’s tender middle grade novel. Following her plumber father’s death, 12-year-old Olive tries to keep her anxiety at bay when she must leave her familiar home and move to a new town with Maudie, the older half-sister she’s just met. Dog devotee Olive thinks a four-legged friend would help, but Maudie believes that a puppy—especially in their space within a New Jersey house share—would be one change too many. Things shift, however, when Olive lucks into the opportunity to raise a pup named Lumie to be a guide dog for the blind. Olive’s confidence grows with Lumie’s every achievement, but near the end of their time together, an incident at the park jeopardizes Lumie’s future. While imparting solid information about guide dogs and their work, Bauer (Soar) employs her well-honed skill at depicting believable, evolving relationships that are rooted in love and nurtured with encouragement. She balances Olive’s big emotions and funny, forthright narration with the light humor of secondary characters and a satisfying, big-hearted ending.

"…let the story wash over you and work its magic…"
-- Booklist

“A wise, entertaining novel for a wide audience, but with special appeal to dog lovers.”
-- Kathleed Odean, The Providence Journal