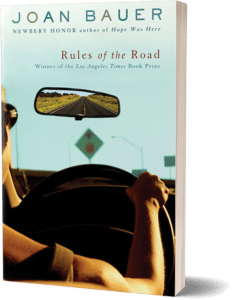 Rules of the Road

Intrepid teenage shoe salesperson, Jenna Boller, needs to get out of town for the summer because of her alcoholic dad, and gets more than she imagined when she’s hired to drive her elderly boss down to Texas for a corporate showdown.

Jenna Boller is the best employee at her branch of Gladstone’s Shoes — she can sell anybody anything. But her family problems are harder to handle, and there are times when Jenna wishes she could just get out of town and take a break. So when Madeline Gladstone, the elderly president of Gladstone Shoe Stores, hires Jenna as her driver for the summer, Jenna leaps at the change — right into the driver’s seat. And that begins a cross-country adventure from Chicago to Dallas, where she and Mrs. Gladstone learn a lot about the rules of the road…and the rules of life.

"Writing with genuine warmth and ready wit, Joan Bauer illuminates the twists and turns of a cross-country journey that starts in a shoe store and ends in revelations about compassion, pluck, and the human spirit."
-- Young Adult Fiction Judges for the Los Angeles Times Book Prize

"Jubilant, strong and funny, this is a road trip to remember."
-- The Bulletin, starred review

Order Rules of the Road from:

WHERE DID YOU GET THE IDEA FOR THIS BOOK?

This story was a crazy mix of things.  Several years before I began writing for young people, I was trying to break into screenwriting and one of the movies I was going to write was about Harry Bender, the greatest shoe salesmen in America.  I’d done all this research about the shoe business, but then I had a car accident that put everything on hold.  Several years later, I revisited that research on the shoe business and decided to turn it into a young adult novel.  I had worked in advertising sales for ten years and I wanted to show the uniqueness and craziness of the best sales people, so I shoved everything into a big literary blender and turned it on.

WHY DOES JENNA SELL SHOES?

I liked the fact that everyone has been in a shoe store and met a shoe salesperson. I’ve always thought that selling shoes took a bit more humility because you have to kneel down in front of someone and actually touch their feet — feet can be ugly and smelly.  It takes a special person to enjoy this.  And Jenna Boller is that person.

JENNA LOVES HER JOB. DID YOU HAVE AFTER  SCHOOL JOBS THAT YOU LOVED?

I’ve always liked working and making money — I was a babysitter like most kids, I was a waitress — and really enjoyed that work and the serious money I made.  I enjoyed meeting people and trying to meet their needs.  And I’ve always been impressed by people who take a job that we wouldn’t think of as exciting or interesting and make it so by their attitude and their respect for people.  Jenna has a heart for people and she wants to do well by her company and the customers.  She always goes the extra mile — it’s why she’s so good.  When I was a waitress, I had lots of regular customers who came in and I always took extra time to get to know them.  Harry Bender, the great salesman in this story tells Jenna, “Caring about people is the greatest secret of success I know.”

JENNA HAS AN AMAZING RELATIONSHIP WITH MRS. GLADSTONE, THE 74 YEAR-OLD HEAD OF GLADSTONE SHOES, AND NOT THE EASIEST PERSON TO GET ALONG WITH. IS MRS. GLADSTONE BASED ON ANYONE YOU KNOW?

I love Mrs. Gladstone — she’s a tough, no nonsense business woman who also has a heart for people, although it takes a while for that heart to come out.  She’s a combination of the strong women I’ve known and the ones I’ve wanted to know.  I admire people like her and their insistence on quality and truth.

YOU GREW UP WITH AN ALCOHOLIC FATHER. HOW MUCH OF YOUR LIFE IS IN THIS NOVEL?

So much of this story is carved from my heart.  I wanted to show how people are made stronger by the tough things they have to face.  And facing alcoholism is the key to beating it.  Jenna’s dad never faced his problem — he always had an excuse, or he just got angry.  My father had that problem, too.  But Harry Bender, the world’s greatest shoe salesman from the book is a recovering alcoholic who faced this disease and beat it, and that made him so strong that he regularly helps people get their lives together.  I think that Harry Bender is the man my father could have been if he’d stopped drinking.

HOW HARD IS IT TO END A BOOK AND LEAVE THE CHARACTERS BEHIND?

It’s terribly hard! You’ve gone through so much with your characters, and if you’re like me, you agonize when they hurt, you cheer when they triumph.  I loved the characters in this book so much, I wrote a companion story.  It begins three weeks after Jenna returns home to Illinois from Texas.  It’s called Best Foot Forward.

Sautee Canadian bacon. Brush olive oil on one side of the bread, spread the other side with honey mustard.

Layer cheddar cheese, thin tomato slices, and sauteed Canadian bacon on the mustard side, top with second piece of bread.  Melt butter or margarine in pan or skillet till sizzling.  Brown sandwich in skillet on both sides till cheese is bubbly.

Cut sandwich at an angle to show off.