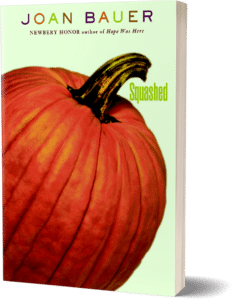 Ellie Morgan is allergic to giving up, and she puts it all on the line to battle tradition and her father’s wishes in her quest to grow the biggest pumpkin in Iowa.

Humor, agriculture and young love all come together in Joan Bauer’s first novel, set in rural Iowa. Sixteen-year-old Ellie Morgan’s life would be almost perfect if she could just get her potentially prize-winning pumpkin to put on hundreds of more pounds–and if she could take off 20 herself… in hopes of attracting Wes, the new boy in town.

"This is a funny, fast-paced book about an ordinary girl with an extraordinary ambition."
-- The New York Times

"This laugh-out-loud story is a delight...Ellie proves herself an all-around winner. So is Max and so is this book."
-- School Library Journal, starred review

"Squashed is fast-paced and engrossing entertainment that startles the reader with its underlying strength."
-- Publishers Weekly

"This laugh-out-loud story is a delight...Ellie proves herself an all-around winner. So is Max and so is this book."
-- School Library Journal, starred review

DID YOU EVER GROW A GIANT PUMPKIN?

No.  I’ve never grown a vegetable that lived.  But I was fascinated by the process.  I did a great deal of research for this book.  Certainly, on the   surface, the story is about putting a seed in the ground and trying to grow a giant.  But that is also, symbolically, what happens when we try to “grow” a big dream.  I thought about both of those things when I wrote SQUASHED, my first novel.  Ellie’s dream was crystal clear — to win the Giant Pumpkin Weigh-In.  My dream was clear, too — I wanted to be a published writer.

IS IT TRUE THAT SQUASHED IS BECOMING A MUSICAL?

It is true.  I’m working with Jeff Bouthiette of Second City and we are creating the play, the songs, and the lyrics together.  We are still in the early stages of this project, but it’s very exciting.

SQUASHED WAS YOUR FIRST NOVEL. HOW HARD WAS IT TO WRITE THAT FIRST BOOK?

I had an extra problem thrown at me, I was in a car accident and I had to have surgery to repair a disk in my neck.  I was not at my best, so much pain, and the thought of writing anything seemed impossible.  But Ellie, the protagonist in SQUASHED, seemed to jump out of me and insist that I tell her story.  So over those months, I wrote a little bit at a time as my injury allowed.

WHO IS YOUR FAVORITE CHARACTER IN SQUASHED?

I have two.  Ellie Morgan, the 16 year old, tough as nails narrator.  And Nana, her grandmother, who understands the deep ways of agriculture.

Test for doneness with a thin knife.